Describe the evolutionary change in the pattern of heart among the vertebrates.

Solution:
Heart is a hollow muscular organ present in all vertebrates which pump blood to whole of the body. Evolutionary change in the heart is observed on the basis of separation of oxygenated and deoxygenated blood for efficient oxygen transport to the body.
Fish heart- It is made up of 2 chambers- one auricle and one ventricle. Since there is  no division of auricles and ventricles, deoxygenated blood passes through it which enters the gills for oxygenation. It has two additional chambers such as sinus venosus and conus arteriosus. 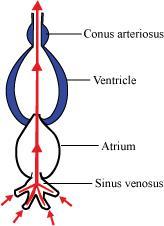 Amphibian heart- It has 3 chambers- 2 auricles and one ventricle. The auricles are divided by a septum while ventricle is undivided. Additional chambers such as sinus venosus and conus arteriosus are also present. The deoxygenated blood from whole body enters the right auricle while oxygenated blood enters the left auricle from the lungs and ultimately two types of blood get mixed up in ventricle. 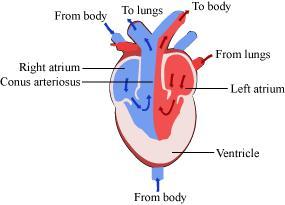 Reptilian heart- It is incompletely 4 chambered except in crocodiles, alligators and gharials. They have only one accessory chamber called sinus venosus. The reptilian heart also shows mixed blood circulation. 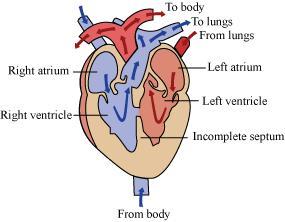 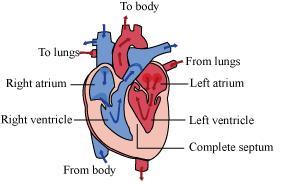 Connecting you to a tutor in 60 seconds.

Get answers to your doubts.

Which of the following match is correct ?

State the fuction of the following in blood

Study the given figure and identify the cells labelled as A, B, C and D

Arteries are best defined as the vessels which

Compared to blood our lymph has